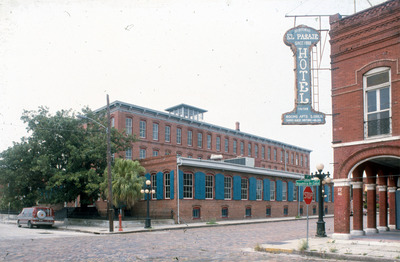 Ybor Square was originally a cigar factory. It, along with the once-sumptuous El Pasaje Hotel, was built at the behest of V. M. Ybor, who began the manufacture of cigars in Tampa in 1885, after having done so in Havana in 1852 and Key West in 1869. The scale and fenestration makes the factory similar to the mills of the Northeast, but the roof is flat and instead of the full-length clearstory of the mills, the factory has a glassed rooftop vent-box. The hotel, with its ground-level open arcade, has something of the Italian Renaissance palazzo. It was originally known as the Cherokee Club, a businessman's club. It lodged Army officers during the Spanish-American War and politicians on campaign swings through Tampa, among them William Jennings Bryan. Listed on the National Register of Historic Places. Title supplied by cataloger. Description supplied by Sape A. Zylstra.