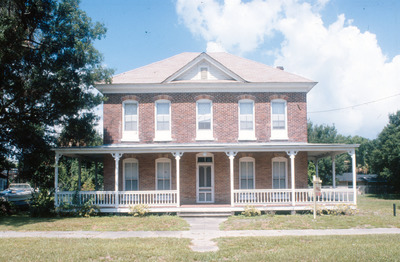 Originally, the house had a flat roof and wrought-iron balconies at the second-floor windows. Its symmetry and window proportions and spacing are part of its Georgian (Revival) character. It was built ca. 1885 by the Plant Steamship Company for an employee. Henry Johnson, a captain in the Spanish-American War, bought it in 1893, after which date the hipped roof and pediment were added, quite in keeping with the rest and, in fact, an improvement. Ethel Wolff, Johnson's daughter, later owned it. Listed on the National Register of Historic Places. This view is the east facade. Title supplied by cataloger. Description supplied by Sape A. Zylstra.