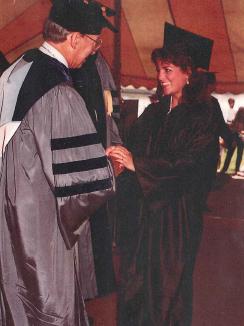 This collection includes programs, scripts, and other materials related to commencement ceremonies held at USF St. Petersburg campus. Please note that the candidates listed in these materials represent individuals who had submitted applications for graduation. However, the presence of a name in a program programs does not necessarily mean that a student met all requirements for graduation during the stated semester.

Graduation celebrations have occurred for USF St. Petersburg campus students since the early 1970s. The first celebration included a dinner and program during which candidates for graduation received certificates at the Port-O-Call, a popular hotel and restaurant (now demolished) on Tierra Verde, in 1971. Although similar celebrations occurred during the 1970s and 1980s, no official commencement was offered except at USF Tampa during this time.

It is the intention of Digital Commons @ USF to comply with all U.S. and international copyright restrictions and to respect the intellectual property of all authors whose work is represented in the archive. If any individual or corporate entity has concerns about a specific item, please contact digitalcommons@usf.edu

About This Collection : Graduations and Commencements, University of South Florida St. Petersburg.