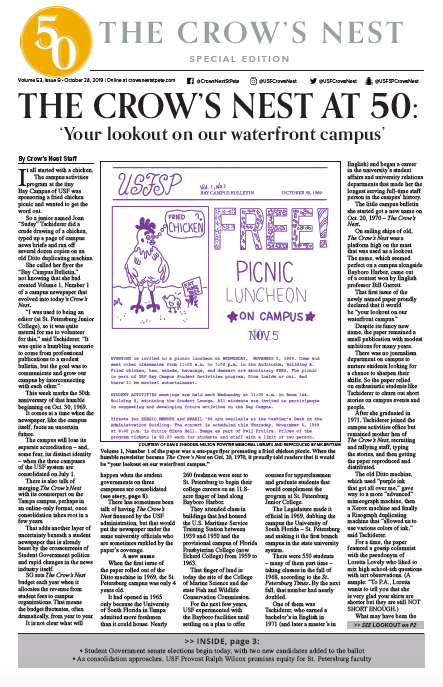 The first issue of The Crow's Nest, which was originally known as the Bay Campus Bulletin, was published on October 30, 1969.

By mid-October 1970, the paper was renamed The Crow's Nest to give the paper an identity that fit in well with the small but growing campus along Bayboro Harbor. The Crow's Nest ceased publication from the summer of 1989 through the fall of 1991. Since 1991, the paper has generally appeared as monthly, semiweekly, or weekly issues during the fall and spring academic semesters. The paper has existed in many printed formats, including single-sheet mimeographed broadsides, small fliers, and traditional newspaper issues. Some later issues have variations of volume and issue numbers.

We would like to thank J.M. "Sudsy" Tschiderer for donating her collection of early issues of The Crow's Nest to the library. Since her days as a student in the late 1960s, Sudsy has played a paramount role in the development of student leadership on campus. She served as a founding member of the Student Activities office and worked in the Division of Student Affairs for nearly twenty-six years before working in other areas of the USF St. Petersburg campus. A USFSP graduate and staff member with an avid interest in journalism, Sudsy contributed to a number of campus publications, including The Crow's Nest which she helped establish in 1969.

It is the intention of the Digital USF St. Petersburg campus archive to comply with all U.S. and international copyright restrictions and to respect the intellectual property of all authors whose work is represented in the archive. If any individual or corporate entity has concerns about a specific item, please contact archive at usfsp.edu.

Printing is not supported at the primary Gallery Thumbnail page. Please first navigate to a specific Image before printing.