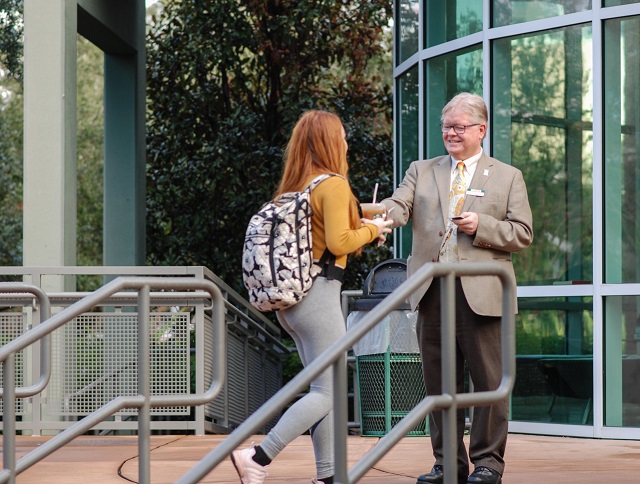 Martin Tadlock is the Regional Chancellor and the Regional Vice Chancellor of Academic Affairs at USF St. Petersburg campus. Dr. Tadlock came to USF St. Petersburg campus in July 2016 from Bemidji State University and Northwest Technical College in northern Minnesota, where he had served as Provost and Vice-President for Academic and Student Affairs. He had previously served as Dean of the College of Professional and Graduate Studies from 2001-2006 at Bemidji State.

He has also served as Assistant Vice-Chancellor at the University of Wisconsin Oshkosh and as Provost at Northeastern State University in Oklahoma, where he was Interim President for six months during a presidential search.

Dr. Tadlock has secured over $6M in grants and contracts and managed over $60M in capital projects over his career. He was instrumental in securing private support resulting in a state financial award for the 360° Manufacturing and Applied Engineering ATE Regional Center of Excellence, one of two National Science Foundation Applied Technology Education Centers of Excellence in Minnesota.

Martin began his career in education 30 years ago as a middle school teacher, served as a professor of middle level education and director of the Center of Education for the Young Adolescent, a Wisconsin Center of Excellence, at the University of Wisconsin Platteville. He was a professor of middle level education, program coordinator, team chair, and assistant dean at Utah State University where he established the first middle level teacher licensure program in the state and the largest graduate seminar in the western U.S., the Rocky Mountain Middle Level Education Seminar which served over 300 middle school teachers and administrators every year.

Martin has a Bachelor’s degree in Geography and Masters of Education in Secondary Education from Utah State University. His Ph.D. is in Educational Administration and Leadership from Miami University of Ohio.

It is the intention of the USF St. Petersburg campus Digital Archive to comply with all U.S. and international copyright restrictions and to respect the intellectual property of all authors whose work is represented in the archive. If any individual or corporate entity has concerns about a specific item, please contact digcol at nelson.usf.edu